Many people think of manual labor when they hear “skilled trades.” It’s easy to picture somebody turning a wrench or sweating a bit as they apply a torch to copper. However, the skilled trades are mentally stimulating career opportunities as well. That’s because the electrical, construction, refrigeration, and HVAC trades require a sound understanding of applied science. Repair technicians also have to diagnose problems in a way that resembles the scientific method.

Although the skilled trades aren’t heavy on math or the more abstract aspects of science, they can provide great career opportunities for people who like science. A skilled trades career allows you to work with science directly and not just in a lab setting. This article will explain how we use applied science every day in the trades and why people who enjoy science may want to consider a skilled trades career. 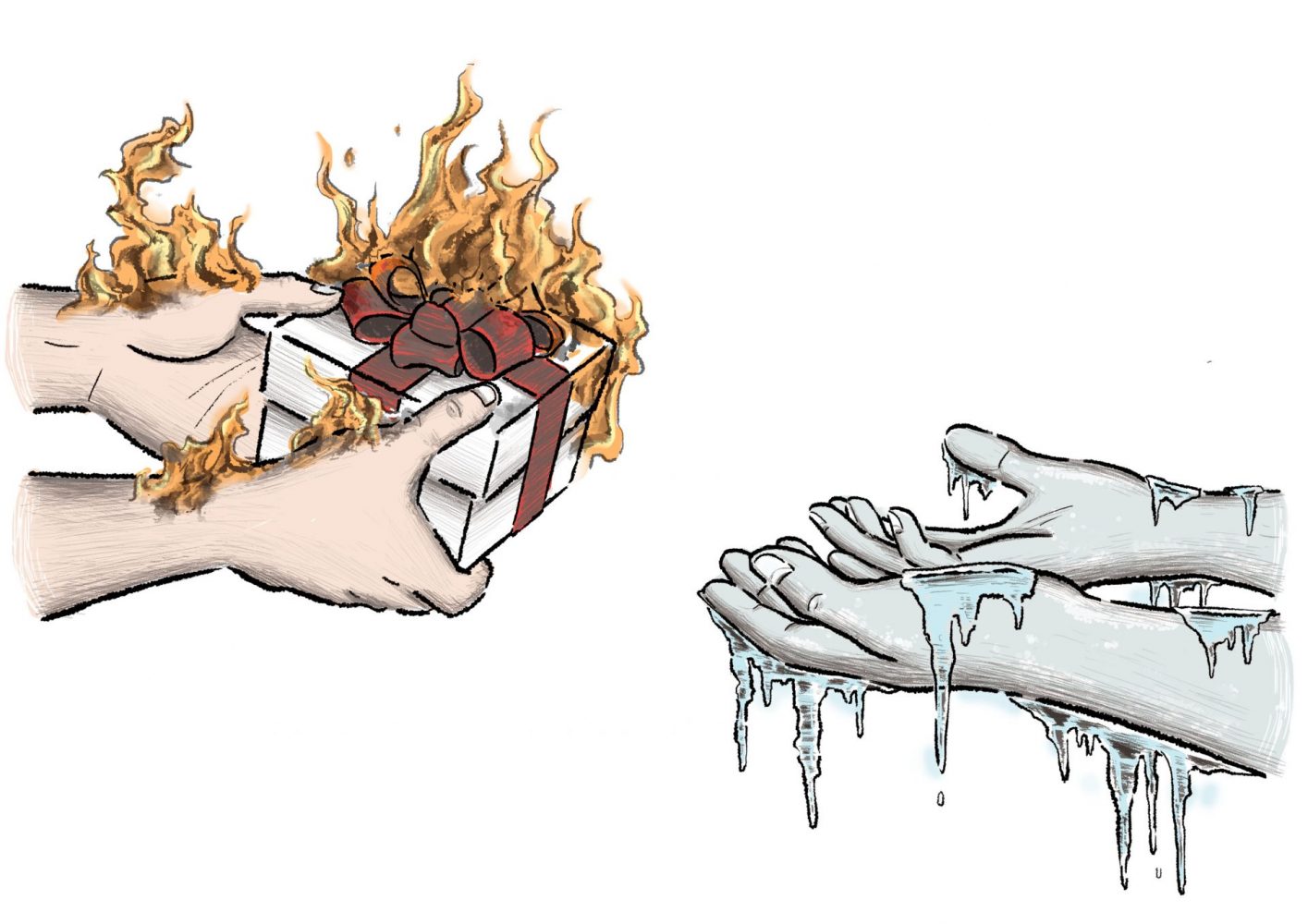 In reality, many A/C units, heat pumps, and refrigerators contain a fluid called refrigerant. (Some of you may know it as coolant or “Freon.”)  Inside the air handler, the blower motor pulls air from inside the home. While that air is moving through the air handler, it passes over a coil full of cold liquid refrigerant. Since the refrigerant in the coil is at a lower temperature than the air moving through it, heat moves into the refrigerant from the air. As that heat leaves the air, the air’s temperature drops. That’s what really makes “cool” air come out of our A/C units.

Those of you who know a lot about science may already know that the study of heat and energy movement is called thermodynamics. The process described above is an example of the Second Law of Thermodynamics; heat can only move from warmer objects to cooler objects.

“Thermodynamics” sounds fancy, like something we’d only think about when we need to use it in a lab or to study it for a test. However, when diagnosing and repairing systems, HVAC and refrigeration tradespeople work with thermodynamics every day! The trades rarely require us to get into the complicated math, but we need a solid understanding of how energy travels in our world.

At Kalos, we integrate applied science into our training, including applied thermodynamics. You can check out one of our internal training videos about thermodynamics in HVAC/R on our website HERE.

Heat pumps, refrigerators, and A/C units also manipulate the temperature and pressure of the refrigerant to condition the air inside a building.

After the liquid refrigerant absorbs heat from the air, it boils and becomes a vapor. As a vapor, it obeys the gas laws.

In the compressor, the refrigerant gets squeezed into a smaller volume, going under a lot of pressure and getting much hotter (even though the mass stays the same). The gas laws can help explain the relationship between temperature, pressure, and volume during compression.

Boyle’s law provides the groundwork that explains why volume decreases when pressure increases and vice versa. If we were to multiply the pressure and volume of the refrigerant before compression and compare it to the multiplied pressure and volume after compression, we’d get the same number. For that number to stay the same, then one of the values (pressure or volume) must go up as the other goes down.

The gas laws may seem too abstract to be of any importance outside a science classroom. However, when you look at them the way we do, they’re essential to everything related to HVAC and refrigeration!

In all sorts of skilled trades that deal with machinery, you will come across electrical components. Electricity is a fascinating and often challenging part of our work.

Electricity deals with the movement of electrons. We typically pay attention to three main values: voltage, amperage, and resistance (ohms). It helps to think of voltage as the electrical pressure making electrons move from one place to another; electrical flow starts from an area of high voltage and moves to one of a lower voltage. Amperage refers to the actual electrons, which travel from place to place on a circuit. Resistance works against the current flow, and it can generate heat or even magnetism. The neat little illustration below captures the relationship between the three: 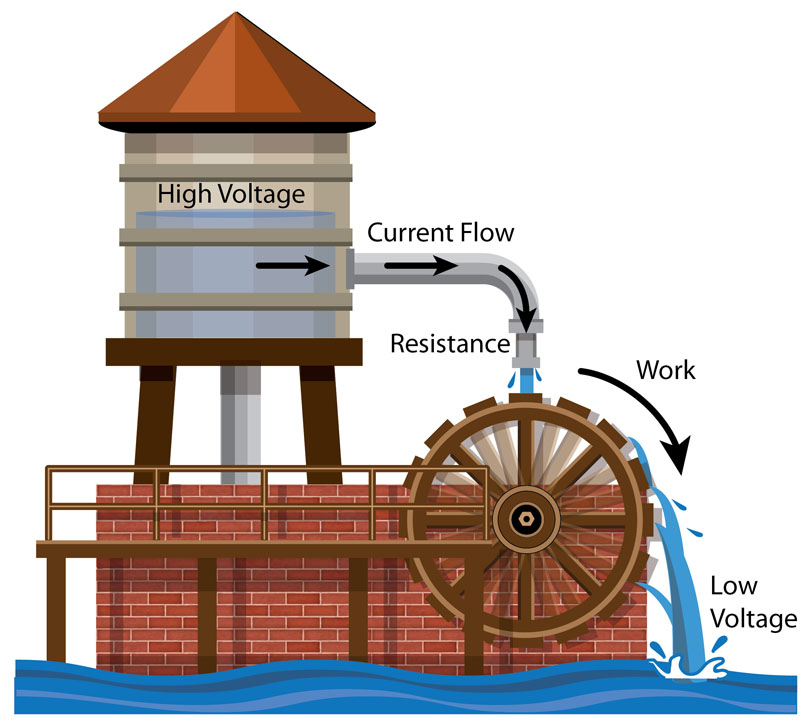 Electrical work requires an understanding of how electricity moves. For electricity to work in a circuit, there needs to be a power source (like a transformer), a switch, and a load. The load is what actually heats up or moves when the switch is closed. A switch is like a drawbridge; when it is closed, electrons (cars) can cross, but when it is open, electrons (cars) can’t cross.

I know (or am) a teen or young adult who is interested in science. What can I do to nurture that interest?

If you have an older child who is interested in electricity and physics, they can learn more about physical science, circuits, and electrical concepts with the HVAC School Physics Fun Kit (developed by the Kalos president). You can purchase that kit (or learn to make it yourself and get a free educational manual PDF) at https://hvacschoolshop.com/.

For adults who are looking for some direction in life, the skilled trades provide great opportunities for people who want to work with science in the real world. There is no shortage of applied science if you seek a career in HVAC, refrigeration, or electrical work. The people who are most successful in these trades like applied science and enjoy the challenges the trades have to offer.

Engineers, lab technicians, or other STEM professionals often spend a lot of time in a lab or indoors. Tradespeople still come face-to-face with scientific concepts, but they also work with their own hands. Learning a trade means that you will also pick up valuable skills for other hobbies and careers.

Kalos has many trades under one roof, and we usually have job openings on a pretty regular basis, including those for apprentices. If you apply for an apprentice position, we will make sure you get the training you need. If you want to know more about the positions currently on our site, you can check out our jobs page HERE. 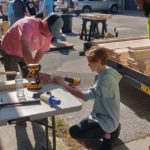 Why Choose a Skilled Trades Career?